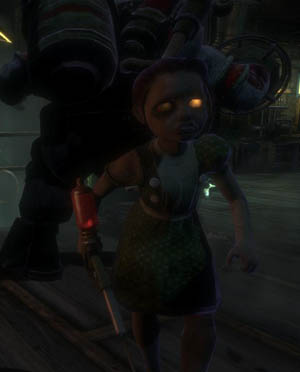 Well Bioshock has been surprising the shit out of me lately. Awhile ago before the game came out 2k released a demo of the game on the Xbox 360. Due to all the mass hype this game was getting I thought I’d download it and give it a try. Needless to say, the demo did less than impress me. Then a couple weeks later 2k releases the same demo but this time for the PC. So I download and try that version thinking that maybe because it’s on a PC, it will be more enjoyable. The end result was still a bland feeling. So when the game finally got released, I didn’t get it right away. But peer pressure kicked in and I bought it anyways; slowly playing my way through it. I now love this game!

A quick note before I continue, this article contains some spoilers. I haven’t beat the game yet, but I just got to what I believe is the second half of the game (after the major turning point). I’m also rescuing the Little Sisters. So unless you’ve gotten past that point, or are taking the other story line, then you might not want to read this. OK, so here we go. I just got to Andrew Ryan and found out who Atlas really is. I must say, wow! That cut scene with Andrew Ryan was probably one of the best cut scenes I’ve ever experienced in a first person shooter. But more on that later.

The game also suffers from what I like to call “No comfort zones”. By this I mean I never felt like there was a safe spot in the game. Or a place were I could rest, reload, check my map, save the game, etc. Some games give you breathing room after certain events, like a boss battle. Or when you finally reach what you think is a safe area (e.g. Smugglers Hideout), only to find it creepy and…well…not safe. Some gamers like this breathing room or a place where they could meet some friendly characters. That’s one of the things I really liked about games like Half-Life. Unfortunately, Bioshock doesn’t seem to offer that. Same thing happened with Doom 3.

Anyways, as the game went on I found it to be more and more addicting. The story; the introduction to new enemies like the Big Daddys; and new weapons and plasmids started to make the game better and more enjoyable. One of the major turning points for me was when I first encountered a Little Sister and was given the choice of what to do with her. Should I listen to Atlas and harvest her completely, or should I rescue her? I went with my gut instinct and decided to rescue them. I’m glad I did and I’m glad I didn’t listen to Atlas (bastard) at that time. Maybe he should of said “Would you kindly harvest that Little Sister?” 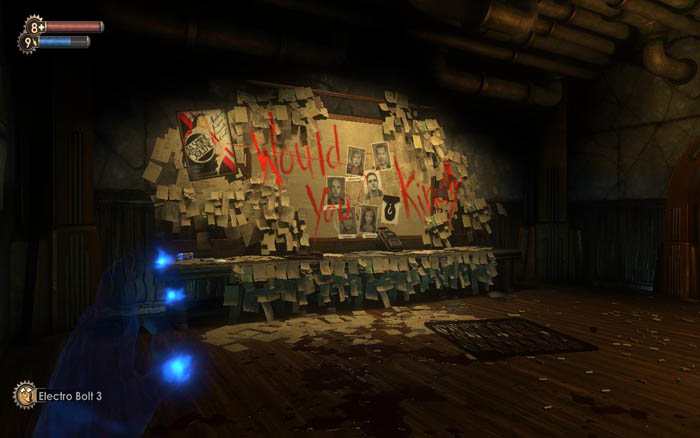 Another turning point in the game for me was the collection of the camera, followed by taking pictures and getting research points, damage increases, etc. I really enjoyed doing that and it kind of broke up some of the monotony I was feeling in the game. I now find myself walking around with my camera out a majority of the time. Say cheese! Aw, you blinked.

Plamids in the game are pretty cool, though I feel I’m not using enough of them. Really the only one I use is the Electric Shock one. That way I can stun my enemies then shoot them or whack them with my wrench. I occasionally use the Fire one and tried out all the others I’ve come across so far, but I really don’t like any of the other ones. One exception though, is the Hypnotize Big Daddy plasmid. It’s fun having a huge body guard tromp around behind you and kick the shit out of anything that tries to harm you. If only I could hypnotize several of them.

Bioshock also has some shocking moments that made me jump, or disturbing moments that made me cringe, and one hilariously funny moment that made me fall out of my chair laughing. This funny moment was a complete accident and not scripted at all. I was fighting a Houdini Splicer who shot a fireball thingy at me. He missed and instead hit the pool of oil on the floor behind me. He then decided to warp or teleport right into that, now a blazed, pool of oil. He of course caught on fire and immediately started running around screaming with his hands flailing in the air. I just thought it was the funniest thing I’ve seen.

One of the most shocking moments for me came when I was in the Medical Ward, in that dentist’s room. You grab this new plasmid off the desk in the corner of the room. The room then fills with fog completely blocking your vision. The fog clears and you’re still looking at the desk. But when you turn around there’s a Splicer standing right behind you, waiting to attack. It literally made me jump in my chair. There were a couple other moments like that, but this one stuck in my head.

As for disturbing moments, there were a couple. One being the cut scene I just encountered with Andrew Ryan and me beating him to death with his putter on his command. Dis-tur-bing. The other was right before that when you listen to a recording of a doctor telling his hypnotized patient to break a puppy’s neck. The patient cries and pleas for the doctor not to do this, but the doctor insist and the patient then breaks the dogs neck. Whoa.

Moments like this are making me like this game more and more. To wrap this up, like I said I just got past the part with Andrew Ryan and was then saved from Atlas by the Little Sisters. I’m now in their hideout, which…does…feel…safe (D’OH!). I can’t wait to get home from work and play more of this game now. I love it. And when I do finally beat it, I will be playing it again, only this time harvesting the Little Sisters whenever I can. I’m interested to see how the story will change (now that I’m actually into the story). Bioshock could be one of my newest favorite fps games and I haven’t even beat it yet. That says something.