Here we go. My most anticipated game of this year has finally come, and unfortunately, gone. But that’s OK, because I’ve already played through it twice and I’m now watching Jenny (wife) play through it. The next installment of Gordon Freeman’s journey takes him through the outskirts of City 17 and into the wild with big outdoor areas, and new elements like weapons, enemies, and friendly faces.

Note: This article will contain spoilers for Episode Two as well as previous Half-Life games. If you don’t want to be spoiled then just skip to the next part of red text. 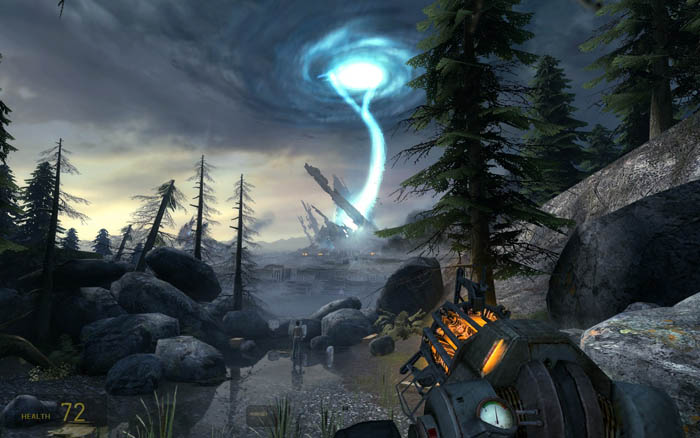 Just like at the beginning of Half-Life and Half-Life 2, Episode Two starts off on a train. You begin where the previous episode left you – on the back of a moving train, heading out of City 17 while the Citadel explodes. Unfortunately, the train was not fast enough and is caught in the explosion several miles outside the city. Like normal, you, Gordon Freeman, are knocked unconscious, only to awake and find yourself in the train, hanging off a destroyed bridge. 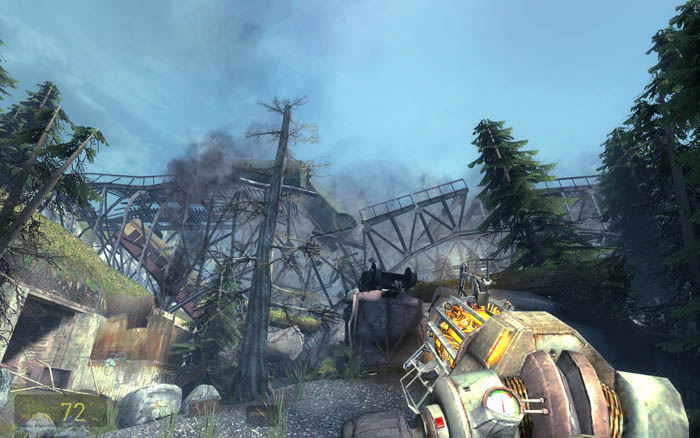 Once out, your partner in Combine crime, Alyx and you head out, trying to meet up with resistance leaders. Right away you’ll notice a graphical improvement in Episode Two. Items that were added in Episode One like HDR are now complimented with higher resolution textures, motion-blur, and a more dynamic and realistic shadows created by your flashlight. While the game may not be on par with upcoming games that utilize DirectX 10, Valve does a great job of sucking all the performance and graphical improvements out of DirectX 9.

I was immediately enthralled in the game given the view or vista of the now destroyed, City 17. While looking at this spectacular site, a portal storm hit completely destroying the bridge behind us where our train once sat, and showing off the great physics engine. All the Half-Life 2 games run on Valve’s Source engine which contains one of the best physics engines ever. In the scenario above, while the bridge fell apart, piece by piece and connected train cars pulling each other down I couldn’t help but realize how realistic this looked. But this is only one of many scenarios that show off the physics engine in Episode Two.

Towards the beginning of the game you come across one of Half-Life’s newest enemy, the Hunter. This new enemy is an amazing one at that and I believe comes from the same Synth family that the Strider and Gun/Drop ships do. Yes, you can consider the Hunter to be a miniature Strider, but it is in no way miniature to a human. Having these agile and powerful creatures stalking you in a house is a frightening experience knowing there’s no where to run or hide where they can’t follow. The Hunter is definitely a dominate force in Episode Two and one of my favorite enemies in the Half-Life universe; over-shadowing most every other enemy in the game….except for one. But more on that in a bit.

Still towards the beginning of the game you have to make your way through the Antlions’ underground colony. Along the way you meet several new creatures. The first is a friendly one and is well known to all Half-Life fans. The Vortigaunts (Vorts). Yes, we’ve meet the Vorts before and interacted with them a few times. But in Episode Two we actually get to fight along side them, and let me tell you the Vorts can kick some major ass! Using their green electric bolts, they can easily kill or stun a group of enemies. In one senario you’re joined by several Vorts to help fend off an Antlion assault, and watching them fight is a great experience. 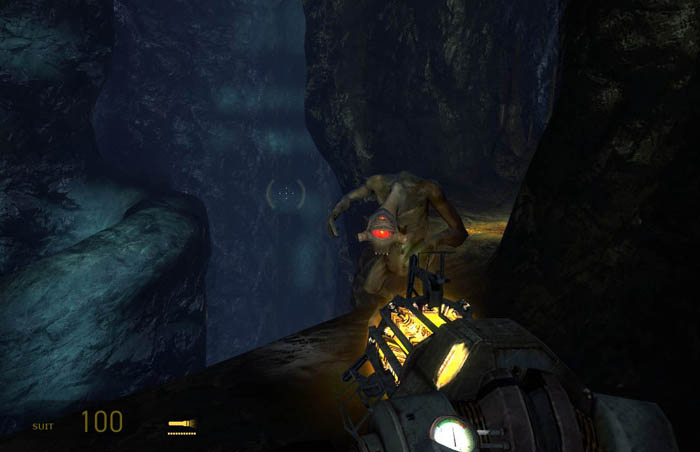 Soon after you’re partnered up with one Vort as you help each other get through the Antlion colony. Having this guy at your side made this otherwise cramp and boring level of tunnels, a fun and wonderful experience. I love Valve’s sense of humor that they put into this game sometimes. For instance, there is one part where you have to climb a latter and the Vort says he can’t follow you. So you climb the latter and move through a corridor, only to suddenly notice your Vort friend behind you. Apparently, he has overcome this “great obstacle”. Heh. Another time, you fall down the big mine shaft and have to use a long latter to climb out. At this point you don’t know where your friend is at, so you just climb up. As you climb up things keep falling down into the shaft and explosions are occurring up top. I kind of makes you hesitant to go up there. And right when you’re about to reach the top, the Vort sticks his head over the side and looks down at you. This scared the bejesus out of me. But I couldn’t help but laugh that my little Vort friend just made me jump. Thanks a lot Valve. I know you guys were thinking, “This will be great! Let’s watch our play testers’ jump!”

You also meet a new Antlion enemy that’s really just annoying and not fun to encounter. Why? Because they don’t like direct confrontation and keep running aways from you, making that much harder to kill. Plus, they shoot this annoying acid that blinds your for a second. In the end, I could of done without seeing this new Antlion enemy. 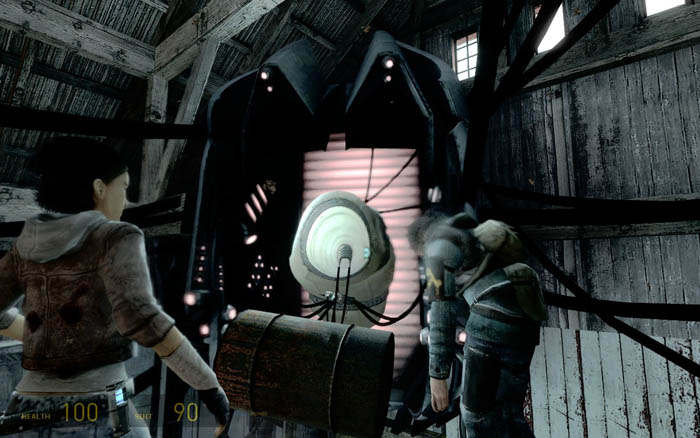 Like I said above, if there’s one enemy that the Hunters don’t overshadow, it’s the Combine Advisors. We first see an Advisor on a computer screen at the end of Half-Life while chasing Dr. Breen out of his office. Later, in Episode One, you and Alyx encounter one shipping off, and get to witness first hand how powerful these creatures can be. But in Episode Two is where we really get to see their power. The few times you encounter an Advisor is never a good one. With their extremely powerful telekinetic powers, they’re impossible to fight. But in some way, luck has gotten you out of their grasp. I’m sure we’ll see more Advisors in Episode Three, and hopefully be able to fight them. 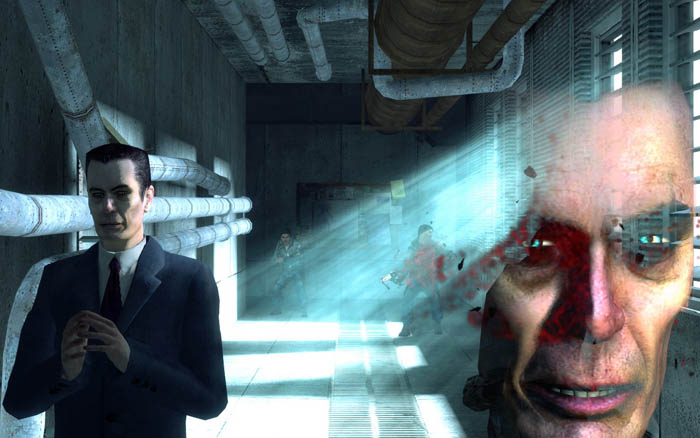 Ah, yes, the G-man. What Half-Life game would be complete without him? At the beginning of Episode One, the Vorts are able to free you of the G-man’s clutches. In turn the G-man loses track of you and you never see him again throughout that episode. But about 1/3 into Episode Two, the G-man catches up to you, and decides to have a “heart to heart” with you. He’s more mysterious than ever in this scene. He now talks about Alyx and how important she is to him, and that you need to escort her safely to her father, where she must relay the message, “Prepare for unforeseen consequences.” I picked up on this right away, as the second chapter in the original Half-Life (right after the Resonance Cascade) is called Unforeseen Consequences. What the hell is the G-man plotting here?

The damn G-man never answers any of our questions. Instead he just creates new ones. Why is he interested in Alyx? Both Eli Vance and him acknowledge that he saved her from Black Mesa, but why? Eli, knows about the G-man, actually, he seems to know a lot more about him than you do. But unfortunately, Eli is killed by a Combine Advisor before he can talk with you. DAMN IT!! Episode Three is going to have to answer a lot of questions…mainly about the G-man and his whole role in this amazing story. And they better be good.

End spoilers here. In the end, Episode Two is an amazing experience and continuation of the Half-Life story. It far surpasses Episode One in just about every way. Like I said at the beginning, I’ve already played through this game twice. Once, just to play through it and experience it, and the other to play through it with Commentary Mode enabled. Introduced in Valve’s test demo, Lost Coast, the player can play through the game and activate these nodes where you can listen to someone who worked on the game and their thoughts or insight on the current scene taking place. I absolutely love this feature and hope Valve continues with it.

Back on topic, with different environments, enemies, weapons, and new story elements, Episode Two is one of my favorite Half-Life games, and I can’t wait to see what the final episode brings.