Playing Assassin’s Creed on the PC is something I’ve been eagerly waiting to do for a long time. I ignored the DRM, instability, and control issues, and dove right in – purchasing the game through Steam. First impressions were mixed. The graphics and story instantly drew me in while the controls and menu navigation threw me off. But I stuck with it, and in the end Assassin’s Creed turned out to be a damn good game.

Moving on, the controls seem to be a big issue for most. I was a little thrown back by them at first as well. But like most new games, you get used to them and soon they become like second nature. Assassin’s Creed was exactly like this. The game does start you out with a tutorial that shows and explains all the controls, but when you enter your first fight or flee, sometimes you can’t remember what you need to do. But I soon got used to them and had no further issues with the controls at all.

A lot of other people are also complaining about constant game crashes. For the record, I did not experience one single issue with the game. Though, I’m running a top of the line PC with Vista. 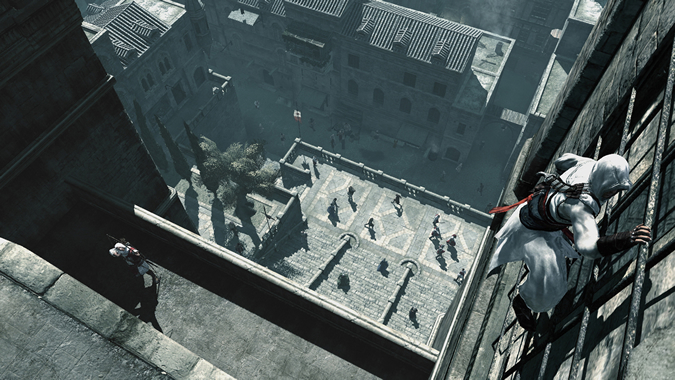 On a related note, the game’s performance was remarkable. I was able to run the game at full resolution with all the settings set to High. The game ran smooth and looked phenomenal  Definitely one of the best looking games I’ve played on my PC so far. Everything is very well detailed and includes very high-res textures. Each city is very dynamic and very believable with lots of people walking around, standing in merchant lines, begging for money, etc.

The game’s sounds were also very well done. There are a lot of distinct sound queues that let you know exactly what’s going on. The musical score is also nice, though a bit overpowering at times. I had to turn down the music volume in the settings so I could more easily hear dialog and other sound effects. 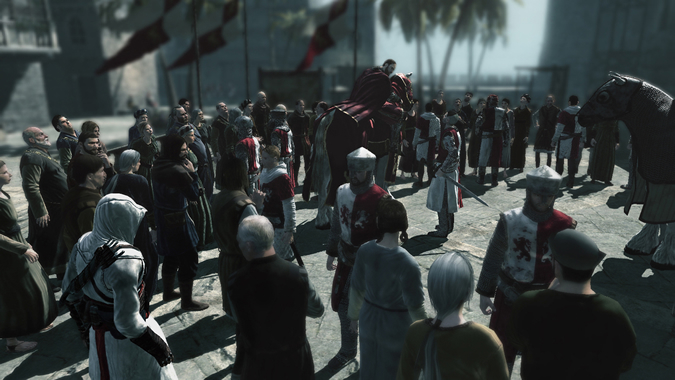 For me, this was definitely the best part of Assassin’s Creed. There’s another completely different “realm” to the story that I never even knew existed. Without this additional “realm” this game would not have been very in-depth and I might have not finished the game if it wasn’t for this “realm”.

Spoiler Paragraph. Of course with additional “realm” I’m talking about the present day story with Desmond Miles and his imprisonment with Abstergo Industries. About half-way through this game I stopped caring about Altair’s story and was more interested in Desmond’s situation (What’s going to happen to him? How or will he ever escape?). But of course in order to figure out his situation you have to relive Altair’s life. I love how the developers took what would have been a standard game-type story of an assassin in the past, and turned it into a much more in-depth story that spans centuries and multiple groups of people. End Spoilers.

Unfortunately, the story/game ends kind of abrubtly as Assassin’s Creed is just the first game in the trilogy. So, that kind of sucked. But I’m definitely hooked and can’t wait for the next game to come out. 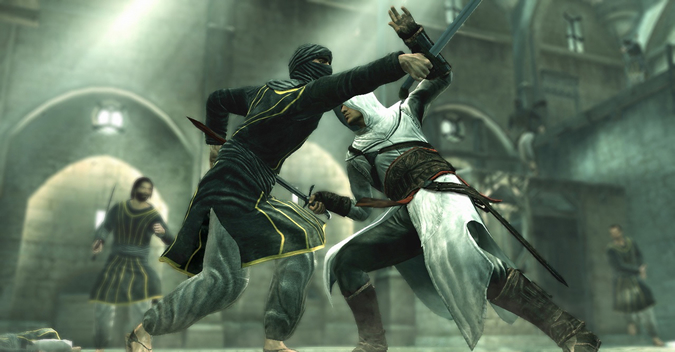 Overall, I really enjoyed this game. It also has some re-playability where you can travel back to certain cities and complete additional tasks. At times the game play felt tedious and repetitive but the story is what kept driving me forward and I can’t wait for the next game. Let’s hope it doesn’t take as long to port over to the PC as this one did.

An additional note: it takes about five minutes to exit out of the game through the navigation menus. It’s easier to just make sure the game is saved (checkpoint system only / no quick saves) and then hit Alt+F4 to exit the game.