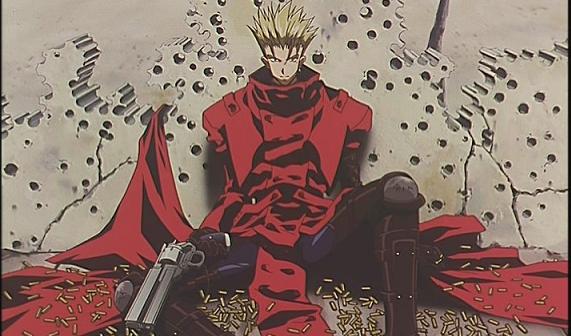 Trigun is another great Japanese anime. I finally finished watching the entire series a few weeks ago and really enjoyed it. Trigun is more on the goofy side of anime when comparing it to other shows like Cowboy Bebop. But this show also contains plenty of serious, dark, action packed moments.

Trigun starts off kind of slow. The first few episodes kind of make you feel like you’ve just been thrown into the middle of the story with no explanation to what’s going on. They also just throw these characters at you and an unfamiliar setting. The series also starts off really goofy, and by goofy I mean funny faces, comments, animations, etc. But the show really starts to pick up towards the middle and end.

This anime follows the main character called Vash the Stampede AKA The Humanoid Typhoon or Vash for short. When we first meet Vash he seems to be one of the more goofy, off-the-wall, not-to-take-to-seriously type of character. But as the show progresses we learn more about Vash and his life, thoughts, and ideas. Vash is pretty much un-killable. He is more powerful than any other character in this show. He can whoop anyone’s ass. He actually reminds me of Goku from DBZ – friendly, a kid at heart, and the best fighter in the world.

Probably the greatest thing about this show is its underlying motto or moral. That being that Life is an incredible thing that everyone deserves. No one deserves to die and no one has the right to take a life, no matter what the circumstances are. Vash lives by this motto. He will not kill anything. He sees life and cherishes it. Death or killing is not an option in any situation. There is always another way. Even when Vash is completely outnumbered by his enemies where he could easily kill them to save him self and the people around him, he will find another way. No matter how evil that person is or what they’ve in their life, Vash will not kill them and realizes they don’t deserve to die. And even so, he also realizes he does not have the right to take a life – no one does.

This truly is a great moral for this anime. Society can learn a lot from it. Death is not the answer. There is always another way, you just have to find it. Vash always found another way and watching him in Trigun get out of the worst situations without killing is just amazing. But just like in real life, deaths do occur. And with this we see another side of Vash. No more Mr. Happy-Go-Lucky. Instead we see anger and tears. You truly grow a mass amount of respect for Vash when seeing this. And any person that can make you respect an animated character is amazing.

Knives – the name of Vash’s twin brother. You guessed it; the complete opposite of Vash. Take someone like Vash with all his love and enjoyment for life and turn it around to hate and death. There you have Knives. One of the most evil characters in Trigun. I say ‘one of the most evil’ because there is another: Legato Bluesummers *shudders*. Definitely one of the coolest bad guys in any show ever.

I would definitely recommend Trigun to any anime fan out there. You just have to put up with some of the goofiness the show throws at you in the beginning. The rest of the series is well worth it. Check it out.