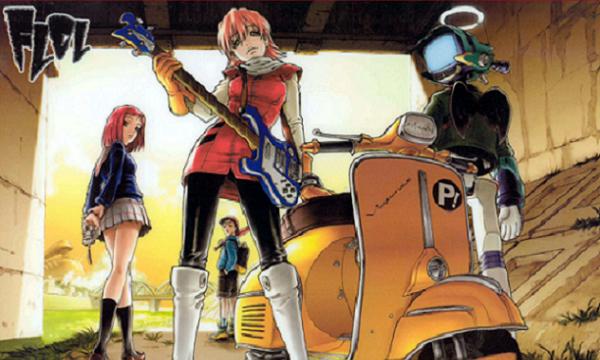 What the hell is Fooly Cooly? Or, what is Furi Kuri? Or how about FLCL? Well they are all the same. FLCL is a weird and bizarre anime that some people love and some people hate. Actually it seems that this anime either gets really, really great reviews or really, really horrible reviews. There’s no happy medium.

At only six episodes long I’ve watched this series several times and absolutely love it. Yep, that’s it. Six episodes long at 30 minutes each. Like I said above, FLCL is one of the most bizarre, goofy, and crazy animes you’ll ever watch. Let’s not forget complicated. I’ve watched the series several times and still do not fully understand it. There is so much innuendo and underlying plots in every aspect of this anime.

So what’s it about? Well to put it simply, it’s about a young boy named Naota and his brother’s girlfriend Mamimi who like to do “perverted” things together. Then this psycho alien chick that carries a bass guitar comes along and uses peoples’ heads as an inter dimensional portal to suck things through. Meanwhile this police space agency is trying to stop this evil corporation from taking over worlds. No one acts their age while these robots that are being sucked out of Naota’s head keep attacking the city. One of these robots eventually becomes Naota’s housekeeper.

Yeah, all of that is packed into six half-hour episodes. And let’s not forget that all of the above mentioned stuff is really just a cover for the main moral of this story. There’s really a sub-plot and moral to this story. The moral: learning to accept yourself and who you are. Plus learning to accept who the people around you are. At least that’s my interpretation of it. Like I’ve said, I’ve seen this anime a good dozen times and still don’t quite understand it. 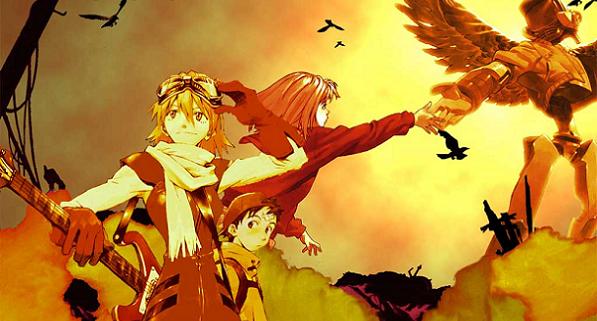 The animation is great and some of the best I’ve seen in anime. Plus the creators like to do different types of animation and will sometimes change from anime to magna or even South Park style. The soundtrack to the series is awesome as well and quite distinctive. The show is filled with sexual themes and nudity so watch out you prudes. The anime is also fairly goofy which turns off a lot of people (Jenny). But if you just think and focus on the characters, story, music, and such it’s really a great experience.

It is a really good anime that I’ll probably watch a lot more of. I definitely recommend it to any anime fan. You’ll either love it (most likely) or you’ll hate it. Fooly Cooly was named one of the best TV series by Anime Insider. Now what does Fooly Cooly mean? Watch and find out.