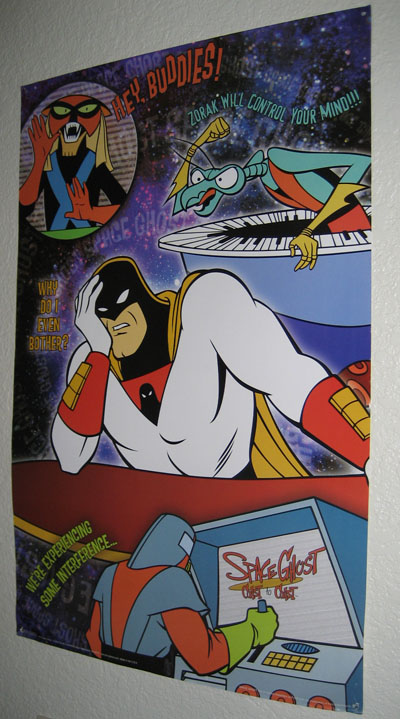 Coast to Coast to be exact. Space Coast: Coast to Coast was a damn funny cartoon/talk show that I used to watch late at night. Well, I haven’t watched it on TV for the past couple of years. Mainly because it’s on too late now. I believe it still airs Sunday night on Adult Swim (Cartoon Network) at around 1 am. Well, I guess you can call that Monday morning rather.

I first saw Space Coast on his Cartoon Planet show. It was just a very weird, and very funny variety show with other characters like Zorak and Brak. Pretty much the creators of Cartoon Planet took excerpts of the old Space Ghost cartoon from the 70’s, and put them in a current show. They did voice overs and had some celebrity cameos as well. Damn funny stuff.

Then at night they had Space Ghost: Coast to Coast. In this show they made it so Space Ghost was the host of a late night talk show. Zorak was the main band dude, while Moltar was the producer/director of the show. For those who don’t know, both Zorak and Moltar are enemies of Space Ghost in the old cartoons. In Coast to Coast they are slaves to Space Ghost and go along as he makes them work on his talk show. But they put up a damn funny fight and don’t make Space Ghost’s job easy.

But one of the coolest things about Coast to Coast is their actual real celebrity guest appearances. Most of the celebrities are definitely confused when they get on the show. They think that they will be able to plug their latest movie/show/book/clothing line, while in reality they are stuck in this awkward cartoon show where the normal late night talk show routine is thrown out the window. I love it! I love the reactions and looks on some of the celebrity faces when the shit goes down. Some take it well and play along, while others just clam up with an angry or disappointing look on their face. “I’m going to kill my agent,” you know some of them are thinking.

Anyways, through the magic of the Internet and multiple video sites, I can start watching episodes of Space Ghost again. Below is some episode that I love. Watch it and love it, though it does take a special kind of humor to enjoy the show. Maybe someday I’ll be able to watch the show again on TV or get the DVD’s.