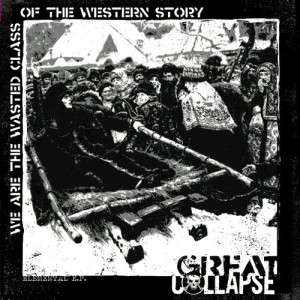 Great Collapse is a new punk band formed by the members of other punk bands, including Strike Anywhere, Rise Against, and Comeback Kid. Not much has been known about this new band until a few weeks ago when they played a show and released a song from their first album, titled Elemental. Shortly afterwards a 6-song album was released.

Strike Anywhere, Rise Against, and Comeback Kid are all great punk bands, so seeing some of their members coming together to form a new band greatly interested me. I picked up this album the day it was released and have been listening to it nonstop for the past few days. Initial impressions are good. The songs contain a nice mix of speed and melodic vocals, along with harder riffs and political lyrics.

If you’re a fan of any of these bands then definitely check out Great Collapse. You can check out one of their songs below and let me know what you think.