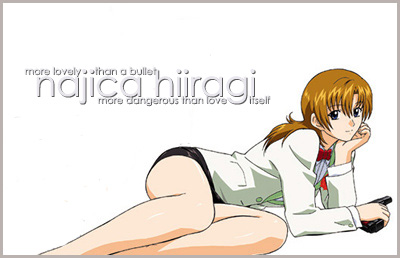 Najica – Blitz Tactics is its name but Najica – Panty Tactics should be its real name. Honestly I have never seen so many panty and crotch shots in a show before. It isn’t necessarily a bad thing, just kind of… weird.

Najica – Blitz Tactics is an anime that follows the life of a secret agent woman named Najica. Najica is your typical secret agent woman. Kicks ass, looks good, independent and strong, yet caring and supportive, blah, blah, blah. To tell you the truth, Najica’s personality is about as thick as a piece of paper. For being the main character in this anime, she doesn’t go through much development. Najica is not annoying or anything, it’s just that she’s very standard and predictible.

The other female lead in this anime is named Lila, and she’s a bit different. Or a bit more interesting. Lila you see, is not human but rather a robot, or cybord, or android, or as the show calls them, Humeroids. And that’s really what this anime is based around. Humeroids are robots that look like humans, but they don’t act like them. They cannot think for themselves and need a master (human) to tell them what to do. At least this is what main characters are told, but as the series moves on we begin to see the Humeroids develop and start thinking and acting on their own.

These Humeroids are what make the anime interesting. Being that they are robots, they’re faster, stronger, and have more special abilities than most humans. But their main weakness is their unability to act or think on their own. They can lack common sense which could get them or their master killed. But like I said before, Humeroids seem to develop or learn over time, like a child. They begin to act on their own, have their own opinions, lie, and even turn against their master.

In this 12 episode anime it’s Najica’s and Lila’s duty to stop the bad guys, or foil their evil plot, or save the world, or whatever. Most of these bad guys though have Humeroids to do their work for them. Some Humeroids are older than others and with their age we see how they develop depending on their master and the life they lived. This makes the anime kind of interesting and the main pro of the series.

As for other aspects of the show, the animation is pretty good, the music is ok, and the characters are interesting (mostly Humeroids). This was an OK anime. Not the best, but not the worst I’ve seen either. It’s the type of show where I’m glad I watched it, but probably won’t watch it again.