When I was a young kid in the 80’s the cartoons were the best ever. I remember waking up on Saturday morning and watching kick ass cartoons, or coming home from a school day to watch some more kick ass cartoons. Oh man they were so cool! They’d be like “BAM!” and I’d be like “COOL!” and they’d be like “EEEERRRR CRASH!” and I’d be like “FUCK YEAH!”. OK, maybe I didn’t curse at the tender age of six, but if I knew how to curse at that time, I definately would of said it.

So nothing gets me more excited now a days when I see the names of my favorite old time cartoons appear on TV. I’d be flipping through the channels and suddenly see Teenage Mutant Ninja Turtles on channel 9. I’d get really excited thinking I’m going to see one of my favorite nostalgic cartoons, when what do I actually see? A piss-poor remake that took the heart and soul out of the show and stuffed it with network money grubbing love. And the same goes with other shows like The Ghostbusters, and Transformers. They’ve been remade and are as horrible as ever. Now when I try to watch these new shows there like “Good Job!” and I’m like “LAME!” and they’re like “Teamwork and diversity are the keys to success!” and I’m like “WTF!!!!”. Only this time I’d actually say “What…The…FUCK!” – as my tainted age of 23 allows me to say that.

Continuing with the Ninja Turtles, let’s take a look at a before and after shot: 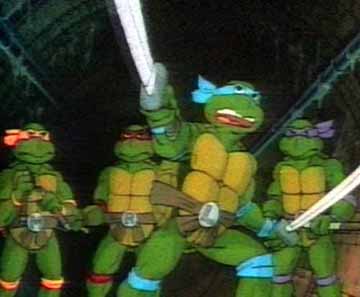 Ah, the lovable TMNT. Looks here like they’re kicking ass and taking names. Mike, Raf, Leo, and Donny all look pissed like someone took their pizza. Damn you Footclan! Heros of the half-shell. Turtle power! 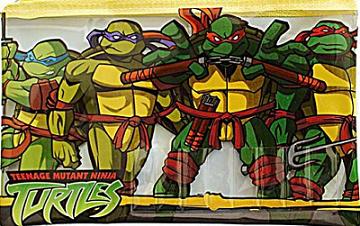 Ok, what happened here? First off, it looks like someone got a Bowflex for Christmas. Seriously, I didn’t know you could see pumped pecks through a turtle shell. Lame. Second, pupiless eyes? It doesn’t make them look cool, it makes them look blind. Might as well change their name to Teenage Mutant Cataract Turtles.

Nope, I don’t like it one bit. I think if they brough back the old show, it would get hella’ better ratings than this new junk does.

The same goes with the Transformers. In the 80’s they had an awesome cartoon series and even cooler toys. I can still remember the exact box/packaging the toys would come in. But now it looks like they’ve been ‘modernized’. Both the toys and the cartoon have been turned to super-concentrated crapfests. Starting with the cartoon: 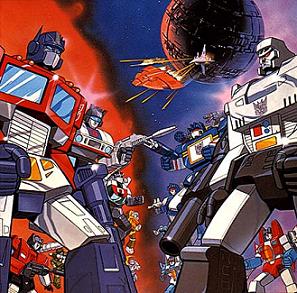 Hell yeah. That’s a badass picture. The Autobots on the left and the Decepticons on the right. If there was a thermometer that measured coolness, then just this picture would explode the thermometer into a million pieces while a rad guitar riff shreds in the background. Now imagine what the actual show or toys would do to the thermometer. 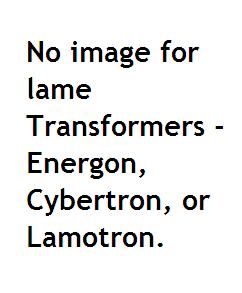 What the hell?! Oh that’s right, I almost forgot. I couldn’t find any pictures of the new Transformer shows. You see, due to the sheer l33tness of the first generation of Transformers, while searching for new Transformer pictures, all I could find were the old kick ass ones. Too bad. But let me try to describe what these new Transformers look like. Take all the characters you see from the original Transformers picture above and add about 872,000 metric tons of crap, guns, spikes, brick ovens, etc to each one. What do you get? Something like this: 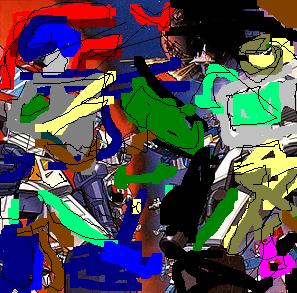 What the hell is that you ask? I was wondering the same thing while watching one of these new Transformer shows. This is all I saw. Some giant robot stuffed with so much crap and neon colors that I couldn’t tell the difference between his head from his ass (robots have asses, right?).

OK, I think that’s enough ranting for one day. I was also going to talk about the horrible remake of The Ghostbuster’s cartoon, but then I realized I’ve only see one or two of these new episodes, and the pure smelliness of them totally wiped my memory (hey! maybe that’s how they get people to watch).