The Sufferer and the Witness – New album from Rise Against 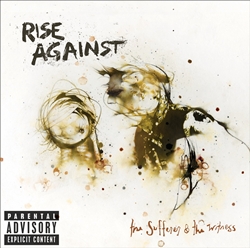 Well, what can I say about this album. Hmm, how about it sucks. Ok, maybe that was a little harsh, but compared to their previous albums, this one is weak. But that’s understandable I guess. I mean they are mainstream now. So they have to play mainstream music to be cool. Whatever.

Anyways, Rise Against’s new album ‘The Sufferer and the Witness” is their fourth full length CD to be released. And boy is it PETA-riffic. Like I said above, this CD is just weaker than their previous ones. It’s not very fast or hardcore, it’s just your typical rock album. I don’t really like it. There are a few songs that I like, but most of the CD is not what I was hoping for.

Yeah, they’re PETA I guess….and they sing about it. It’s kind of annoying. I’m for the ethical treatment of animals and all, but I don’t need someone to sing to me about it. It just reminds me of a little girl singing about ponies and unicorns.

Also, some of their songs are just weird. The verse/chorus/bridge in some of the songs just don’t seem to match at all. It’s kind of like they took a cool bridge they created and threw it into a song missing a bridge. It just doesn’t match or sound right or flow together correctly. They do a lot of beat changes on this album that just drive me crazy. For instance, the verse will be at a certain beat or tempo and then the chorus will be something completely different. It doesn’t sound right or good. In my opinion anyways.

If you’re a Rise Against fan (like me) then you’ll probably like some of this CD (like me). But if you want to hear a truly good Rise Against album, I suggest ‘Revolutions Per Minute’ or ‘Siren Songs of the Counter Culture’. I know that’s what I’ll be listening to instead.