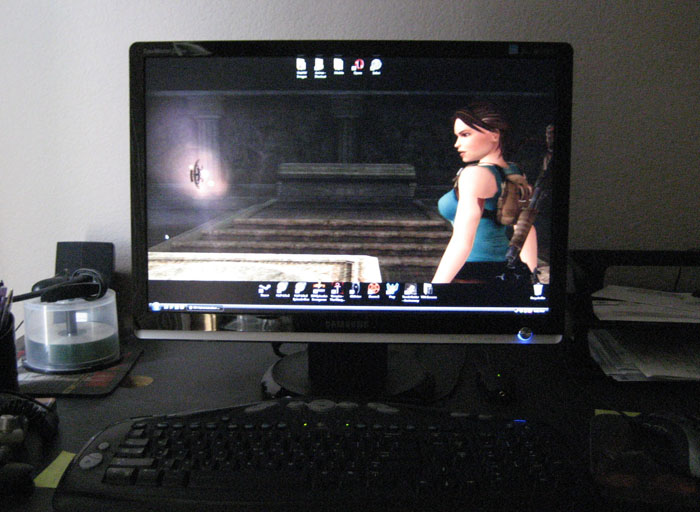 I finally got rid of the giant 50 lb. 21″ beast of a CRT monitor and got a nice, sharp 22″ widescreen LCD monitor. It’s a Samsung SyncMaster 226BW to be exact, with 2ms response time and 3000:1 contrast ratio. It is sleek and sexy and matches my computer case (both colors and lights) which is a definite plus. One of the best things about this is now I have a lot more desk space, and when I say desk space, I phyically mean with my desk. My old monitor was a couple feet thick and barely allowed my keyboard to sit in front of it without pushing it off the desk. Because of that setup I couldn’t write on anything plus I ended up sitting really close to the monitor. With my new LCD I obviously have a lot more room and I no longer have to sit real close. This make working on my web sites and playing video games a lot easier on the eyes.

The only issue I have with the new monitor is figuring out where to place my center channel speaker. With the old monitor I just stuck the speaker on top of it, but with the LCD that’s kind of impossible. But for the time being I just got it sitting next to the monitor. Once the monitor was setup, I quickly tried out a few games that have native widescreen support like Tomb Raider Anniversary, and Half-Life 2: Episode One. Both look great with the new widescreen, digital connection. Though, I now have to get used to these fancy fandangled widescreen resolutions. I can’t recognize any of them so, while setting up a game for example, it takes a few trials and errors before I find a widescreen resolution that looks good or correct.

Anyways, below is a picture of the new setup. It’s a crappy picture but at least you can all see what it looks like and how much better it is compared to the old one.