Several months ago I picked up Batman: Arkham Origins for the PC. I believe Steam had it on sale and I thought to myself; the first two Arkham games (Asylum and City) were great, so I might as well get this one. Unfortunately, Arkham Origins has been less than entertaining. So much so, that I have not played the game for two months and have so far only put in about four hours of play.

So what’s the problem?

Simply put, I’m bored with the game. Arkham Origins plays exactly like the first two games. The gameplay, combat, and gadgets are all roughly the same. This is a good thing as all these gameplay elements are decent, but the problem is repetition. I feel like I’m playing the same game over again. Just like the first two games, you roam around and try to get from point A to B to continue the story. There are lots of little side-quests and objectives that can be completed to help mix up the gameplay. You fight heaps of enemies and eventually come across bosses which offer a bit more of a challenge. 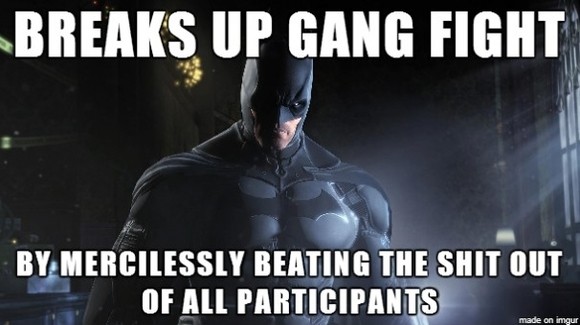 Again, the problem is that I feel like I’ve done all this already. Slightly different gadgets or new areas are not enough, just more of the same under a new coat of paint. I understand that most games with sequels or prequels can be diagnosed with the same symptoms, but with Arkam Origins I feel more “bleh” than normal.

I don’t care about the story

I’m thinking the story behind Arkham Origins is the problem. Usually, at this point I can get by any repetitive game by being drawn into an interesting story (cue Assassin’s Creed). Arkham Origins does not deliver this for me. In the two months since I lasted played it, I completely forgot what was happening in the game. When I was able to recall most of it, I didn’t care. I wasn’t interested in playing to move the story along as I didn’t care where the story was going. Combine this with very repetitive gameplay and I’m just completely bored with the game.

I’m not trying to say Arkham Origins is a bad game. Like many forms of art, the quality of a game and its story are highly subjective. For me, repetitive gameplay and a boring story makes this game a chore to play. And unfortunately, this is not the only game where I’ve run into this situation. I’ve been unable to play much of Grand Theft Auto V because of the same reasons. Also, this is the reason I have not picked up the latest Assassin’s Creed (Black Flag) game either.

I do expect that I will eventually complete Arkham Origins… it just might take me a couple years to do. In the meantime, let me know what you think and maybe you can help me solve my problem with this otherwise decent game.