I believe this is the third or fourth time that I’m playing through this game. Vampire: The Masquerade – Bloodlines is its full title and I really enjoy playing this game. Bloodlines is an RPG/FPS game that came out for the PC a few years ago and runs off the Half-Life 2 Source engine. While the game may not be as big or complex as other RPGs, it does have depth. It’s also worlds apart from your typical fantasy RPG. Bloodlines, as I’m sure you figured out by now, revolves around the world of vampires and everything they do in our present time to try and hide themselves from the rest of the world. 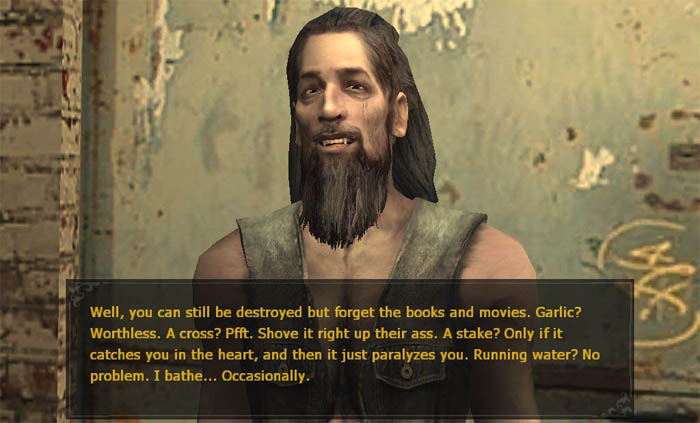 But this game offers so much more than your typical vampire game. While most people think of vampire games as mindless chores filled with characters doing vampire-like material (drinking blood, yelling “BLAH!”, etc.), Bloodlines actually takes you into the political side of the vampire underworld. You get to see the different sects or clans of vampires. You get to see the rules and regulations that vampires must uphold to maintain the masquerade. You see the penalties and punishments of those who don’t follow the rules or choose to go it alone. And much like us humans, or Kind as vampires call us, vampires have their differences of opinion on how these politics should work. It’s great being right in the middle of all this. 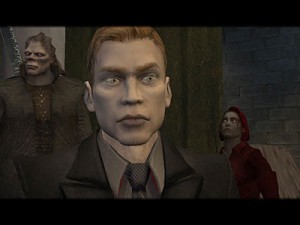 Like most games, you start off at the bottom rung. You’ve just been sired, or turned into a vampire, illegally. As punishment for turning you without approval, your sire is killed and you’re next on the list. Luckily, though, a debate breaks out on what should happen to you. The Camarilla, or rule makers and enforcers, want to kill you because the rules were broken, while other vampire groups object. To show some leniency and keep their political gain, the Camarilla decide to let you live.

And that’s how most of the game plays out. Your character is stuck in the middle of this feud. The Camarilla claim they’re just trying to be good by enforcing rules and regulations on every vampire clan, while the clans just see the Camarilla as nothing more than a company trying to obtain political power and money. Meanwhile, there’s a group of vampires that nobody wants alive due to all the unspoken rules they are breaking. You’ll have to decide who you can trust, what rules or laws you want to obey, and figure out how evil or good of a vampire you choose to be. While there really is no right or wrong path, there will be consequences for your actions – some good, some bad. Oh, and most vampires are starting to believe that Gehenna, or the end of the world, is coming. Joy!

After you’re freed from the grips of the Camarilla you now have to gain experience and recognition to move through the vampire world. But prior to all this, you get to create your character, in which there are two ways. One way you can just manually pick everything. Choose what vampire clan/class you want to be with and pick which attributes you wish to start out with. Or another way is to answer a series of questions to help determine the type of person you are, at which point the game will then assign you to a vampire sect that most resembles you. And just like how classes work in other RPGs, vampire sects or clans come with different strengths, abilities, and weaknesses.

From there you’re assigned tons of different tasks or missions, and you’ll need to complete them to get more experience points that you can then use to increase your character’s abilities. You have typical abilities that you can increase like strength, firearms, melee, persuasion, etc., but you also get a few unique/vampire abilities based on what clan you are. 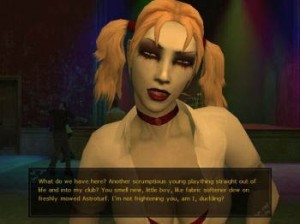 The game also comes with several different ending depending on which paths you choose to take during the game. Side with the Camarilla and you may get one ending; side with the Anarchs and you may get another; or choose to go it alone and you may get another ending. Now while each individual mission may end the same, how you get to that completion is up to you. Most all missions allow you to complete them how you wish. You can go in guns blazing, axe out and rip apart everyone in your way. Or you can take the more stealthy approach and sneak around. Or you can use some persuasion, seduction, or intimidation to get the job done. And that’s what I love about this game and why I’ve played through it a few times now. Depending on what vampire clan you choose, what abilities you wish to increase, what side in the political fight you side with, you’ll get a different game.

Unfortunately, the game does have a few bugs and feels a bit rushed at times. Though, I’ve just played through the entire game on Windows Vista, in Windowed mode, and didn’t experience one issue or crash. Nice! But there are some weird animations and cut-scenes that are not very polished. The company that developed this game, Troika Games, went out of business some time after they completed this game. While there are some official patches that clear up some game play issues, the game is kind of unsupported at the moment. But the fans picked up the game and gave it several more unofficial patches. So if you play this game (which I recommend), don’t forget to grab all the patches as well, or you might be in for a bumpy ride.

Vampire: The Masquerade – Bloodlines is definitely one of my favorite games of all time. And that’s saying a lot seeing as I play a lot of games. If you get a chance to play this game and like RPGs or vampires then play this game. No regrets here.