I finally got my first big screen TV

It’s been a long time coming, but after years of impatient waiting I finally got a TV I always wanted. A big screen, high-def, rear-projection to be exact. Finally, I can watch TV, movies, and play video games the way they are meant to be played, in high-def. I rarely buy things on a whim, especially with big items like this, but it was too good to give up.

On Monday, Memorial Day, Jenny and I set out to just buy a nice TV stand to put our current crappy TV on. Since we moved into our new house a month ago, the TV has just been sitting on the floor making it difficult for us to see from the couch. We’ve been looking for some nice TV stands for the past couple of weeks but were unlucky in finding any. They were either too expensive, or ugly, or too cheap materials wise. But Jenny had enough and finally found some nice looking, inexpensive ones at Best Buy. And that was our goal for the day – to spend a $100-$200 on a TV stand and nothing more.

Heh, well with Memorial Day comes huge deals and saving at just about every retailer in the country, including Best Buy. We walk into the store and start looking around, when we come across a TV. It was a Toshiba 50″ HDTV wide screen with DLP technology and 720p resolution. It had several HDMI, Component, S-Video, and standard video/audio inputs as well as a PC/VGA input. It was also on sale for several hundred dollars less than its normal price. And the best thing was that we could actually afford it.

So we bought the TV along with a TV stand and took them home to setup. The TV stand was very nice but took me an hour or two to put together. After which we set the new TV on top of it, hooked everything up, and turned it on for the first time. Everything looks great! Currently we just have digital cable TV but will probably be upping it to the HD cable service soon.

As for movies and more importantly, the Xbox 360, they look phenomenal! I’m so happy that I can finally play my 360 games in the glory that they’re meant to be seen – in crisp high-def 720p resolution. Even the 360 Dashboard looks amazing. I spend a few hours just playing quickly through Gears of War and was blown away by the amount of detail that I was missing before. Great stuff. 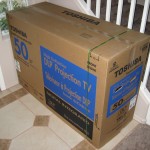 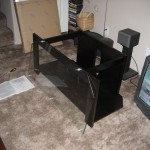 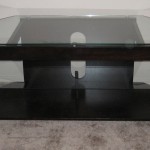 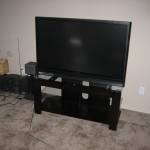 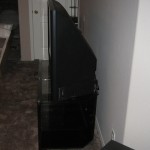 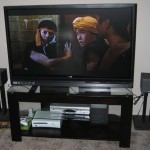