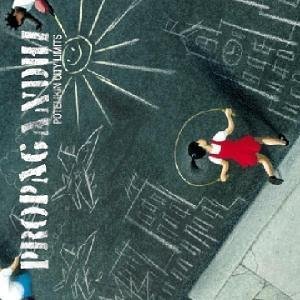 But from most of the songs I’ve heard so far, the CD seems pretty cool. It has its share of slow and fast songs. The first song of the CD is one of my favorites and really sets the mood for the rest of the CD. Though, in this CD they seem more serious and not so funny anymore. In previous CDs they would have funny or ‘silly’ songs that were catchy and would break up the songs in the CD. In this new CD all the songs kind of run together and if you’re casually listening to it, you might not be able to tell which song you’re on. But I’m sure more recognition of the songs will come the more I listen to them.

I haven’t really read any of their lyrics yet either, but with a name like ‘Propaghandi’ and song titles like ‘Rock For Sustainable Capitalism’ or ‘Die Jugend Marschiert (America’s Army)’ you know it’s nothing but political.

I might write more info on the CD when I listen to it some more. They also just played here last Saturday. I didn’t go. I’ve always been a fan of Propaghandi but not so much where I would go to all their shows, or buy all their CDs. But I can tell you any Propaghandi fan will like this CD.