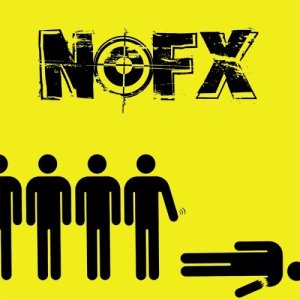 I can be the first to tell you that I’m not a huge NOFX fan. They’ve released a couple dozen CDs and have been around forever. You could say they are one of the most well known punk bands out there with one of the largest fan bases. But I’ve never been a huge fan. That doesn’t mean they suck or anything, it’s just I don’t go out and buy every one of their CD’s or go and see them in concert.

Like I said above they have a very impressive discography. To quote their site, “10 studio full lengths, about 6 EPs, and a metric ton of 7’s.” Currently I own two CD’s including their newest one, Wolves in Wolves Clothing. I’ve owned more in the past but since then they’ve been traded, lost, stolen, or accidentally destroyed.

NOFX’s previous CD, awesomely titled The War on Errorism, kicked ass. Plain and simple. I love that CD from beginning to end. So of course I was hyped when their newest CD came out last month. I bought it right away and have been listening to it a lot. It’s ok. It’s not my favorite CD but definitely good to listen to. The War on Errorism was a lot better which kind of disappoints me since Wolves in Wolves Clothing could not match it.

The theme of their new CD is awesome though. NOFX is a political band (what punk band isn’t?) but this CD tackles religion. It’s got some funny songs and more serious ones. Good stuff.

Of course all the super NOFX fans will already have this CD, but if you’re thinking of getting it I would suggest The War on Errorism instead (if you don’t have it already). You can find more info about Wolves in Wolves Clothing and some song samples at their site here.